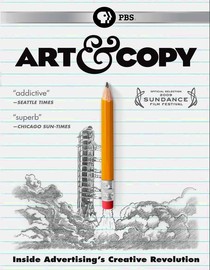 As photographers we are often in the same boat as the creatives who work in advertising – with similar clients, similar goals, and we’re often working together on projects.  Having come from an agency background, watching Art & Copy: Inside Advertising’s Creative Revolution was a joy.

Kevin here at the studio recommended it and the documentary does a good job of showing a lot of the people and personalities that have driven some of the most influential agencies in the advertising industry.

Anyone who’s worked in advertising will be able to relate to a lot of what’s said, but one of the more interesting things to see is how creativity and passion drives individuals like Lee Clow, Jeff Goodby

and Hal Riney.   Anyone can take something from this film but two things that stuck with me were the inspiration of the phrase “Just Do It” (both it’s conception, and how it later inspired so many others in such a variety of ways), as well as the quote on the movie poster: “Creativity can solve anything”