Yesterday we covered Google I/O and were pretty impressed with some of the announcements they made and of course were intrigued by the Google Photos announcement and the associated features.  As you may have heard, it’s got a lot of fun features and if you used photos in Google+ as an app, some of the features will be familiar.

One of the things that got people pretty amped was unlimited storage.  This is true if you are using your phone for most of your pix, but if you wanna save RAW files then there are still limits, but let’s be honest, this is really a way to organize all the photos you’ve taken on your phone (how many of us have thousands of photos and have to scroll endlessly to find anything?).  If your photos are under 16 megapixels then you’re fine and that means all your phone pix, so it is unlimited in that capacity. 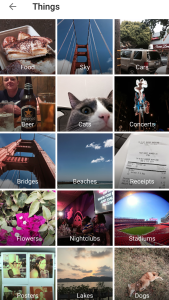 One of the features that I like so far is the “Things” search option.  It’s pretty smart and as you can see in the screen grab, this is just for the photos it’s imported so far (only about 1/3 of the photos on my phone).  The dogs thumbnail actually shows a dead coyote, but otherwise it’s pretty accurate without any input from me.

It also has face recognition that seems to work pretty well and helps in finding pix of you and your friends.

Definitely makes it way easier to find things overall and that alone is a great takeaway.  I also love the “Auto Awesome” animated GIFs it’ll make from burst photos.  Here’s a fun one it made just now (and if you want one of our animated GIF photo booths, book one here):

Check out Gizmodo’s initial thoughts on Google Photos here for another quick perspective.